In 2012 James Brennan – singer songwriter and QLD performer - was asked to put together a tribute to Bruce Springsteen after a suggestion by fans that he looked, and more importantly, sounded, very similar to Bruce Springsteen. After months of rehearsals and hours of learning, the show was born and over a two and a half year period, the show was staged across the Sunshine Coast, Gold Coast and Brisbane region. After being contacted by tour promoters in Sydney, James elected to relocate to New South Wales and bring his show down to Australia’s biggest city. Here he sourced some of the best musicians in the business and started the process of recreating the show locally.

The band also has a wealth of experience in the industry locally and internationally and its members are equally committed to presenting a precise and perfect tribute to the man recently named the number one performer of all time. Renaming the show Glory Days – The Boss Experience, the show has been met with great enthusiasm from bookers and punters alike and is performing across the state. Bruce Springsteen is an American musician, singer, songwriter and humanitarian. He is best known for his distinctive voice, his work with his E Street Band, his working class attitude and the Americana style of music. Springsteen is renowned for his brand of poetic lyrics, and nicknamed around the world as The Boss.

Springsteen has sold more than 64 million albums in the United States and more than 120 million records worldwide, making him one of the world's best-selling artists of all time. He has earned numerous awards for his work, including 20 Grammy Awards, two Golden Globes, and an Academy Award as well as being inducted into both the Songwriters Hall of Fame and the Rock and Roll Hall of Fame in 1999. He is ranked no 23 on Rolling Stone Magazine’s 2004 list of the 100 Greatest Artists of All Time. Recreating the pedigree and performance standard of a Springsteen concert is no mean feat and has required hours of rehearsal and fine-tuning. Patrons love the attention to detail and respect the quality musicianship that is required to present the authenticity of the show that James and his team have tirelessly put together. 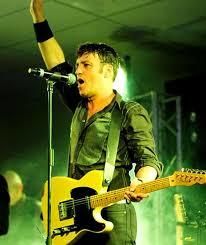