Half game show. Half party. Thats how we describe it.

One Bingo caller calls out the numbers and his budding Dj play songs from the 80's and 90's that rhyme with those numbers.

Throw in some jokes, tributes and spontaneous air guitar competition and you'll soon see why Bogan Bingo is performing from office spaces to cruise ships in a town near you.

Since Bogan Bingo has been running for over 8 years, the show has purposely developed into a product that incorporates every type of entertainment you're ever likely to find.

Each event consists of:

During the show, the numbers continually prompt snippets of songs, jokes, group 'shout outs' and air guitar competitions that make the crowd the stars of the show.

Each show can be tailored to suit your crowd or event, its as simple as not calling out certain numbers or just not doing the joke we have for it. As a result, we get to perform for all types of schools, companies and communities ranging from Rotary Clubs, Catholic Schools, Motorcycle Clubs and even the Australian Cake decorators Association. What a night that was! All you need is a little sense of humor and the ability to laugh at yourself.

So be sure to get a quote, we know its a hard sell to get some people over the line, and we'll send you to that meeting with all the ammunition you need!

Client is to provide: stage / performance area production, refreshments for two, a private and secure change room (toilets not acceptable) and parking close to venue for artists. 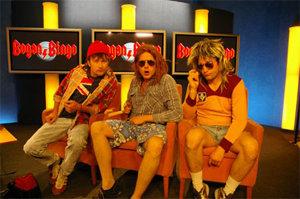