Ben is the leading entertainer in his field, His dynamic magic has been seen by millions of people on TV and thousands of Australia’s leading companies and corporations, making him Australia’s most successful comedy magician for his age in Australia. In 2005 alone he has appeared on 15 TV shows, broke two Guinness World Records and was voted for sight act and Entertainer of the year.

His Satisfied Clients Include- Sony Music, BHP Billition, DHL Express, Telstra, The Australian Government, Coca Cola, ANZ, Nokia  to name a few.
Recent Reviews
"The best entertainment we have ever had, truly incredible." The Sunday Mail

“Your show was awesome! Everyone is still raving about it!” Sony Music

“Ben, I still have no idea of how you got my $50 note inside that can of baked beans very funny stuff! Thanks again” DHL Express

Thanks again for Friday night. You close up magic is truly amazing, you were very funny, It got everyone talking and it was the perfect ice breaker for our event. Sensis

“You’re amazing! We got great feed back about your show! Thank you for making our event so special!" Nissan Motors

“Making our director magically appear on stage for the speeches this year was fantastic! people are still talking about it!” Einkorn & Partners

“You were brilliant! Your trick where the $50 note changed into a $100 note was a Hugh success. We can’t wait to see what you come up with next year!” The National Bank “

So whether he’s making your CEO materialize on stage, pocketing your watch or amazing your guest
with his hilarious comedy show. Ben can customise a show of enchanting close up magic, wild comedy magic or a world-class Las Vegas style illusion show to suit your event and budget. So if its results you want combined an unforgettable WOW factor … you’ll Need Ben Bradshaw’s–HILARIOUS COMEDY MAGIC!!!!! 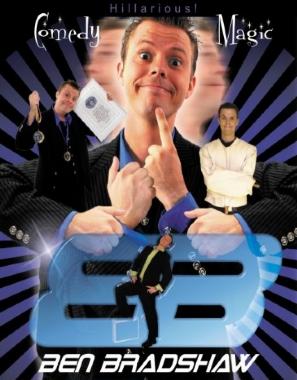