Prepared to be astonished!

GET READY FOR A JOURNEY TO A WORLD OF MYSTERIES AND WONDERS, A WORLD WHERE EVERYTHING YOU CAN IMAGINE IS REAL...
Adding professional caliber magic to your next corporate event or private function will have a big impact on your guests!
Close your eyes for just a moment, and think back to that wonderful time in your life when magic was real...Remember when rabbits popped out of top hats and coins could be plucked from your ears?Zatanna can re-create magical memories just like those for your events mixed with new original cutting edge magic...it will be a special occasion never to be forgotten.
Entertainment tailored to cater for any event from the largest convention, conference or hospitality suite to an intimate meeting or reception with original magic, illusions or mentalism.
ZATANNA, Queen of Illusion is an international multi-award winning entertainer and will amaze you with her elegant, classy, sexy and fun magic that your guests will be talking about months after.

Make your next event something never to be forgotten.

Zatanna is a multi-talented French/Italian born transgender magician, illusionist and mentalist who moved to Australia in 2006. She blends reality & imagination to create new, original and unique mind-blowing magic that will confound and mesmerise your guests. Her natural wit and humour will also keep you laughing and smiling!

It will be a special occasion never to be forgotten.

Have fun and be entertained from Close-up to a fully staged show!

CLOSE-UP MAGIC: Close-up magic is an idea imported from the USA, and the tradition has gained widespread worldwide popularity and brings a touch of class to your event. ZATANNA performs her magic, roving in cocktail situations or at each table magic performed so close to your eyes you won’t believe it. It is the most self-contained act available with no need for stage or technical requirements .

PARLOUR /STAND-UP SHOWS: Ideal for a crowd of 5 to 35, Zatanna will perform witty mentalism and classics of magic with no microphone or heavy set-up and still give you a feeling of a stage theatrical show.

STAGE / ILLUSION SHOWS: For a crowd of 50 to 1000+, Zatanna can offer the right show to fit your budget and goals, whether it is a one woman intimate show or a full illusion show with her assistants. She can levitate a spectator on stage, or cut her assistant in half....

So whatever is your venue or your function ZATANNA will adapt herself to suit your need.
ZATANNA has performed in Japan, China, Malaysia, Europe and has been booked by some of the biggest companies in Australia. She also produced her own shows during the Fringe World.
Female illusionists and close-up magicians are rare, so stand out from the crowd, make the right choice, book ZATANNA as your high-end corporate entertainment. She will leave you speechless with amazement.
Make your next event unforgettable, your guests will talk about it for months to come.
Zatanna, Queen of Illusions, will make you the hero for making the magic happen .

Here is a 4* review of her mentalism show during 2016 Fringe World Festival:

I have always had some scepticism regarding the art of mentalism and fortune telling; I personally thought it was down to reading micro facial expressions, combined with a lucky guess.

So when I was given the opportunity to review the popular Perth based, mental telepathist, Zatanna I was unsure of what to expect from her particular show.

The show was based in a private room within the Hellenic Center, this made for an intimate setting. Zatanna started things off with a quote from Picasso “everything you can imagine is real”.

The show featured numerous performances, which included revealing details about audience members, from lucky numbers to parents’ names, all through the act of mentalism (sensing individual’s thoughts). She even levitated a table, which even I must admit was impressive!

I did find some aspects of the performance leaned more towards party tricks than actually reading minds; such as, unlocking my friends I phone without knowing the code, and involving me in a card trick, that ultimately lead to Zatanna uncovering my card (King of Spades) at random, from a repeatedly shuffled deck.

Zatanna certainly knows how to work a room; each act involved a different member of the audience, which made it seem as though she was performing directly to each individual in the room. This added an element of exclusivity, and gave each audience member a sense of involvement.

Overall I found that ‘Zatanna’s Theatre of the Mind’ makes for a very entertaining evening...

I rate this show a 4/5, because it’s engaging and gets everyone involved, also Zatanna’s charisma alone, would be enough to keep anyone entertained. 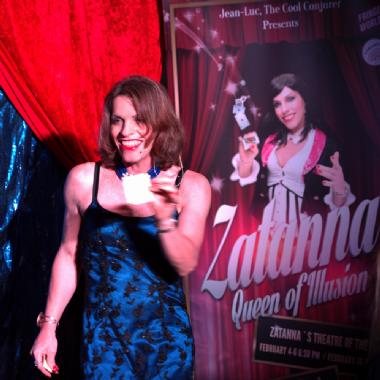