The 20th century, without a doubt, was THE period for the greatest vocalists and music in American history. Phil Crosby Jr., vocalist, musican, and jazz artist, has defined himself as a stand out entertainer continuing this legacy of American music and culture, for an entirely new generation of listeners to appreciate. Inspired by the American Songbook, Phil identifies with some of the most influential crooners of the period. Crosby, who grew up surrounded by music, musicians, and entertainers, in one of the most well known families in Hollywood, found his own unique passion for music surrounded by the music of Frank Sinatra, Dean Martin, Sammy Davis Jr., Perry Como, Andy Williams, and of course, the greatest and most legendary crooner of all, Bing Crosby, Phil’s grandfather. An entertainer since the age of 8, starring in several television shows and commercials, Phil’s musical career was sired with his first blues-rock fusion band, from during his teenage years. As a seasoned veteran of the L.A. rock scene, Phil’s creative inspiration has extended into his Nashville roots, as a guitarist, as well as a Country and folk song singer, touring throughout the country. Phil’s artistic journey led him to revisit the classical study of music and art, with a stint at the Humboldt County Light Opera Company. Phil’s creative quest subsequently led him back to his ancestral beginnings, The American Songbook, and early 20th century jazz.

Phil is a pillar of the Los Angeles art scene, and has performed at several Hollywood landmark theaters there and around the world. He has appeared on stage, on television and on radio, as well as in nightclubs in L.A., New York City, San Francisco, Nashville Tennessee, Tokyo Japan, and in Dublin Ireland. The Holiday season inspires Phil to perform his applauded Christmas show, all the while he is active as a philanthropist, performing for noble and honorable charitable causes and events. Phil has produced an acclaimed cabaret act in tribute to his grandfather, as well as a host of classic variety shows in the newly renovated Hollywood area.

Phil has developed his own unique crooning style, and an interpretative approach to his music, prompted by the great jazz singers, including his grandfather, and by a world of popular music with over a century of American songs. Phil’s passion lies with his interest in sharing his insight and love of this very special period of American music, with younger generations and with those who appreciate this great movement in American music. 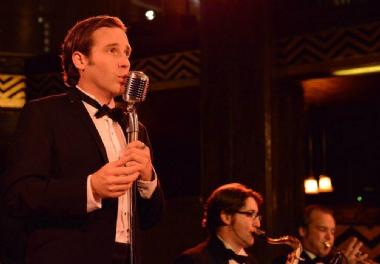